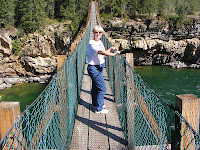 Kootenai Falls and the Swinging Bridge ~

1. Cash machines are as dirty as public toilets.
2. Daft Punk named their band after a negative reviewer called their act "a bunch of daft punk."
3. A typical lead pencil can draw a line that is 35 miles long.
4. If you had 10 billion $1 notes and spent one every second of every day, it would require 317 years for you to go broke.

5. The hands of the clock on the back of the $100 bill are set at approximately 4:10.
6. Coins usually survive in circulation for about 30 years.
7. American car horns beep in the tone of F.
8. No one knows Albert Eistein's last words. Just before he passed, he spoke several words in German, but his nurse only knew English.
9. In Monopoly, the character locked behind the bars is called Jake the Jailbird. Officer Edgar Mallory sent him to jail.
10. The longest Monopoly game in history lasted 70 straight days.
11. Play-Doh was first manufactured as a wallpaper cleaner.
12. Tae Kwon Do is only around 60 years old.

13. The 409 escalators in the London subway cover a distance every week which is approximately equivalent to several trips around the globe!
14. It is impossible to hum if your nose is plugged.
15. One in five long-term love relationships began with one or both partners being involved with others.
16. When someone looks at a new love, the neural circuits that are usually associated with social judgment are suppressed.
17. Couples' personalities converge over time to make partners more and more similar.
18. When withdrawing money from an ATM, the 'whirring' sound before your money pops out is actually a recording. The actual mechanism is so far back that you can't hear it.
19. Most of the dust underneath your bed is actually your own dead skin.
20. 'X' became symbolic for a kiss because in the middle ages when alot of people were illiterate and they used to sign documents with an X and then kiss it for sincerity.


23. Bullet proof vests, fire escapes, windshield wipers, and laser printers were all invented by women.
24. The most children born to one woman was 69, she was a peasant who lived a 40 year life, in which she had 16 twins, 7 triplets, and 4 quadruplets.
25. Donkeys kill more people annually than plane crashes. 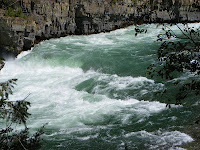 Kootenai Falls and the Swinging Bridge ~ Libby, MT ~ Downstream from Libby, the Kootenai River enters a canyon and flows over Kootenai Falls, one of the largest free-flowing waterfalls in the northwest. The falls and surrounding area are considered sacred to the Kootenai Indians whose ancestors inhabited the region. A forest trail leads from the highway parking lot down to the Swinging Bridge and makes a nice hike that is not too strenuous. Kootenai Falls was the setting for the filming of the movie, "River Wild".

Great post, Rita. I learn something from you every day. I remember when the Kirby Vacuum guy came to our house years ago to do a demo. He insisted on vacuuming our mattress, and I was appalled...so, I'm not suprised about what may be UNDER the bed. It was gross enough to think of what was ON the bed. Oh...and we bought the vacuum cleaner. :) I had to chuckle about the Play Doh. How real to think of someone inventing something for one reason and finding out it made a great toy. :)

Wow, interesting facts. I love the fact that all those things were invented by women.

You have a point! giggle