Let me share with you how they catch monkeys. 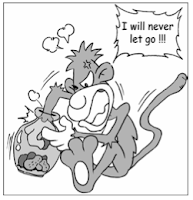 Imagine a wooden box 12” x 12” and the top opens because it has hinges. Imagine opening the box and setting a big, red juicy apply in the bottom of the box. Then imagine closing and locking it. Then, around to the side is a hole and it is big enough for the monkey to look inside and see the red, juicy apple. But the hole is small enough so the only way for the monkey to get inside the box is to squeeze his fingers inside the hole. Now imagine the monkey reaching inside the box and grabbing the red, juicy apple. Now the apple is in the palm of the monkey’s hand.

However, there is a problem. As the monkey tries to pull his hand out of the box, he finds it doesn’t fit through the hole. The reason is because the apple is in the palm of the monkey’s hand. Now the monkey won’t let go of that apple for anything. As a result, the poacher comes in and kills the monkey. Now realize, all the monkey would have to do is let go of the apple and he’d be free, but he won’t let go. Soon he’s a dead monkey.
This is a metaphor for people who just don’t discipline themselves to write. Usually there is something in your life that you need to let go. But, as a result of not letting it go, it remains a roadblock to your success. Ultimately it ends up hurting you.
Talk with your writing group or friend and ask, ‘what am I not letting go of?’ Meaning; is it your fear, is it the security of knowing you can’t finish your book, you don’t have to worry about what to do next – once the book is finished or is it because you’re just lazy? Whatever the challenge is, for most people, they don’t open themselves up to themselves or their writing partners, to learn what is not allowing them to ‘let go of the apple.’ Ultimately, it leads to the death of your writing career.
5. Growing as a person. You know people want to be successful to see their income grow and they want to grow, yet they’re not willing to make the sacrifices that it takes to develop new skill-sets, new beliefs, and new habits. They take the same ‘employee mentality’ and bring it to the environment where they write. I think we’ll all agree, that someone who is an international best selling author with over 30 million books in print has a different mind-set than one who hasn’t yet published a book or has one or two books to their credit. Which is all the more reason why we must grow as people.

6. Under confidence. If only I was published, then I’d write more and have more confidence. Well, people…it’s a big myth. It’s about reaching your personal writing goal and you won’t reach it without giving 100% to the first book, then second book, etc. Don’t look at someone else’s success to measure your own or lack thereof. 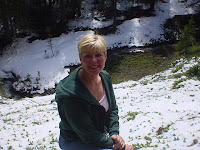 Next Monday we’ll discuss what happens when people do things ‘consistently right.’


Hiking last spring . . . looking for geods . . . the hike was great but we didn't find any crystals.  We are going again this summer in hope of being more successful.

What a wonderful post, Rita. I think I have a hand in two boxes with an apple in each. Yes, if we want to be productive, we have to let go of some things. Ah, I never cared much for apples anyhow. :)

There you guys go again, monkeying with my head. What a fantastic lesson this one is. Another variation on the theme of refusing to let go of something that is dragging you to your death. Now I've got to go into the Fibber McGee closet in my mind to check for shiny red apples that have lured me astray.
Thanks Ladies!

A most concrete lesson, Rita, and full of wisdom.

They say you have to clean out the old crap, in order to let in the new...

Looks like I need to let go of the apple too. Just can't for the life of me figure out what it is. Food for thought.

Apples I be reasonable about - allow it to drop back in the box and focus on my work - but if it was a bar of Lindt chocolate with chilli in it - the poacher would have to shoot me because I ain't letting go!

I know those luring apples! giggle

It's something I think about when I hold onto the old. We are creatures of habit... but . . .this is one habit I've pretty much learned to let go. That monkey does haunt me now and then!

It's great though that it makes you think . . . sometime soon you're going to say, "uh huh . . . I figured it out!" The revelation alone with be a wake-up call. I just know I'm so relieved to have 'let go' of those things that were holding me back or down. Feel free to share with us when you get that 'uh huh' moment! :)

That is tooooo funny for words! Yep... good thing that story wasn't called 'letting go of the chocolate' ... of course that would be catchy if one was on a diet! giggle