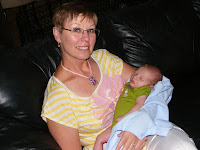 Good morning - Here I am with my new grandson!  I'm on vacation . . . today is my writing day.  I popped out onto our blog and realized I didn't have a scheduled discussion set up for this morning.  I decided it's a good time to share what happened to me last week.  I went out to Amazon.com to check on my books.  :)   There it was ... shock .... upset ..... did I really read that?? Is my book really that bad??  NO!  I received the following 'horrifying' review - oh, I did not add the misspells in the review!

1.0 out of 5 stars High Hopes Dashed July 27, 2012 - By Doobie = I don't like to give negative reviews to first time writers, because I think they need encouragement to contine in the craft.
However, I cannot in my heart of hearts as a reader, review this book honestly without telling the other readers the truth.

The first chapter was wonderful. Great storyline, few misspellings, grammar was acceptable. Then I moved on to the next chapter and that it is where it fell apart.
Twins born to a woman who died in childbirth...good start. One child lived with the true father, the other kept by the woman's husband. We are still okay. Then we had the "dads" taking the children to meet each other at age sixteen.
After that, the story became more and more farcicle. There were inconsistancies in who was talking. "He" when it should have been "She." Unbelievable dialog, grammar errors, punctuation errors, misspellings, etc.
I could have forgiven the typos and punctuation if the story had been interesting enough, but it wasn't.
It is my hope that the author will take another look at her book, tighten up the story, give it more believabilty and republish. She had a good thing going at the beginning and I wish her luck in making the rest of the book match the first chapter

You can only imagine how devastated I felt?  I spoke with my publisher (Books We Love) and she told me, "First don’t worry about the one stars, there are a few stalkers out there who deliberately give one stars."  Say what?  Really??  they have nothing better to do with their time?   "...Again, everyone gets an occasional one star from those Amazon “stalkers” who look for romance books to pounce on – they are notorious – Nora Roberts and Stephen King get them as well – they are largely discounted by readers who consider these woman nasty bitter cranks."
I truly had never thought about that. I was upset when reading Ginger's recent blog about the 'nasty reviewers' ... it angered me.  This was a first time for me - and it hurts. Why do some people get a perverse pleasure from trying to destroy someone else?  It's beyond me.  The following day I went back out to Amazon to check again' and read the following review!  I don't know who Lillian is  - but I'd love to give her a hug!

5.0 out of 5 stars The Other Review is Ridiculous - Woman Doesn't recognize regional dialect August 2, 2012   By Lillian - I'm a huge fan of Rita Karnopp, although I have not previously reviewed her books because others always say it better than I can. However when I came across this and read that ridiculous review, I had to go back to my book and yes re-read to see if I had missed anything. The top of my pet peeve list is readers who display lack of knowledge by failing to recognize "deliberate misspellings" "dialect" because the author is speaking in the language of character.

This is a complex book -- obviously too deep for the reviewer who didn't recognize that the words weren't misspelled they were written in dialect, it has a complex plot and as is typical of a Rita Karnopp novel, and certainly not written by a "first time author".
From all of your fans, Ms. Karnopp, please ignore that reviewer and keep writing your wonderful books with their complex and multi-layered plots, and please never stop giving us the books written so expertly in the language of the characters. Yes, there will be a few people who, like the ridiculous one star reviewer, are incapable of telling dialect from misspelling, but your true fans will ignore them.

That took the sting out of the earlier horrific review! It didn't take away the 'hurt' or the 'disappointment' I initially felt when reading my abilities as a writer being torn-apart . . . but it certainly put my 'karma' back in balance.  I should not have bought into it.  As Eleanor Roosevelt once said, "No one can say anything to hurt me, unless I allow them to."
My publisher later sent me the following list and added, "Look at the good company you’re in." (I just love Books We Love.)

When Laura Hewett follows her father out of the mountains she never expects to lose him to an avalanche before they reach their destination of Helena, in the Territory of Montana. With the help of her friend Raven Quiver, Laura arrives at the Prickly Pear Ranch on her sixteenth birthday. Her life changes forever when she learns that the man who raised her was not her real father. Daniel Hewett stole her mother and her, leaving behind a twin sister, Lilly.

Lilly Rolston is spoiled, possessive, demanding, and uncaring; all traits she leaned well from her father, Gerhard Rolston. Lilly is furious to find out not only does she have a twin sister, but she now has a half-Blackfeet brother, Jason Rolston. If it’s true, then she no longer is the sole heir of the Rolston Prickly Pear Ranch as well as the Rolston rich gold-producing Golden Eagle Mine. This is not the sixteenth birthday surprise she was hoping for.

Betrayed by Lilly, Andy Meldrum is bent on revenge and kidnaps Laura. Upon learning he has taken the wrong girl, he goes back and captures Lilly. He’ll trade the pair as slaves to the Blackfeet; putting the high and mighty Lilly Rolston in her place.

I love when they start out their reviews with - "I don't like to give negative reviews...." If you check their other reviews, you'll see many that start out that way. I agree with BWL, ignore them and move on. I know easier said than done.

This is a great post and I'm glad to see you've got your karma back in balance! Keep on writing ... and do it for the love of it and not the reviews ;-)

Isn't that the truth, Roseanne! If they really hate to give 'negative review' perhaps they shouldn't... they should look for the good. Don't you wonder if it's not just a 'power' thing? hmmm . . . thanks for the support. :)

Thanks, Iris . . . it startles a person...doesn't it? I guess we just don't expect to be torn apart and spit out! :( I'm glad I was working on my presentation - it was a reminder - I'm in charge of how much I will let it affect me.... or not let it affect me. Phew! Thanks for pointing out ... write because I love it! You're so right! :)

Without going into detail, your post has made me feel SO much better! Thanks so much for sharing your story, and huge hugs to the '5-star' reviewer who was willing to put the record straight for other readers.

Thank heavens writing pulls us back no matter the price!

Joanna . . . I'm glad my post made you feel so much better. I must say if I knew the reviewer who was willing to respond - I'd send her a free book! No one likes to be ripped apart.