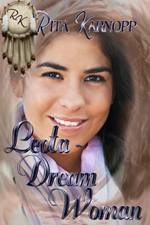 I'm so excited to share with you my newest release, Leota ~ Dream Woman.  I was doing research for another book when I ran across a paragraph describing the Treaty of 1855 ~ and suddenly a story came to mind and haunted me until I wrote Leota ~ Dream Woman. I hope you enjoy it.  Feel free to let me know what you think.  ritakarnopp@bresnan.net

In 1855, the Great Spirit sends Leota, a psychic Blackfoot woman, on a mission to convince Chief Lame Bull not to sign a treaty. If she fails, the white man's government will steal all that belongs to the Blackfeet Nation.

Lawyer Marsh Pepperhorn comes west to join his family and finds them murdered, except for his mouthy nephew Tanner, who's bent on revenge. Chasing the killers into the Mountains of the Bear's Paw, Montana Territory, their paths cross Leota's.

Although Marsh and Leota distrust each other on sight, they work together to save an injured Tanner's life. As they face hardships and challengers, an unlikely romance blossoms between them. When traders abduct Leota, Marsh must track them down and bring the men to justice or lose the woman he loves.

A sweeping tale of changing culture, survival, discovery, adventure, and romance – Leota - Dream Woman has it all.

"This is the story of the way the Native American Indian was betrayed by the white man and their own love of cheap whiskey. It is sad to know that a proud, spiritual race was brought low by the neglect and broken promises of people who had given their word. Karnopp writes with sensitivity and hope and a real understanding of what happened. Some of her writing is lyrical in its beauty and it touches the soul. I loved this book and give it five red roses." ~ Anne , Redrosesfor authors.reviews


*Previously released as Wind Song.
Posted by Rita Karnopp at 1:00 AM