MY SISTER ~ MY FRIEND. 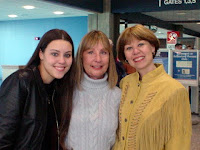 Picture - My daughter, Jamie on left, sister Diane in middle, and me on the right.
I’m feeling a bit nostalgic today … you see when I was at the writer’s conference last weekend … an aspiring author and I went to have a social drink with some people.  While we were dancing and having fun I spotted two ladies in their 50s talking and laughing.
I guessed them to be ‘sisters.’  They appeared to be enjoying the music . . . so it didn’t take me long to get them out on the dance floor – dancin’ up a storm.  After a while I learned, yes they were sisters and they were having their ‘sisters week’ together.  I told them they were fantastic to create a yearly ‘sister’s week’ … and to continue doing it.  “One day . . . you may not have each other.  I know how that feels.”
As many of you know, I lost my sister, Diane, to throat cancer three years ago August.  It was close to the end of the world to me.  She had always been there for me.  As children she protected me. When our family broke up I was ten and she twelve.  We left together to live with foster people. After a year we were sent to live with our father’s sister, where the sister between us lived on a farm . . . but it was Diane who continued to be there for me.
She joined the Army out of high school just to escape the way things were. I was so alone. I wondered why she never wrote. I wondered where she was and how she was doing.  Years later, when I was seventeen, our father passed away from throat cancer.  That was when we found each other again.  I learned she had been writing, and she was devastated no one ever wrote her back.  It seems our aunt found it ‘satisfying’ to keep those letters away from me. (Totally another story!)
Over the next forty years my sister and I got to know each other . . . to share everything!  We had marathon phone conversations.  I could start a sentence … she would finish it.  We used to joke, when our husbands found out who we were talking to, they just tossed a kiss our way and said, “good-night!”   Three or four in the morning – we would decide we had to say good-bye.  We took turns calling each other.
Once her throat cancer got bad – we had to resort to IMing each other every week instead.  We both typed as fast as we talked – so it worked – 130 WPM!  I would jot down on a piece of paper the things I wanted to talk about.  You know – three years after she’s gone – I still find myself reaching for that notepad.
My sister lived in California and I live in Montana. I wouldn’t give up one phone call, one IM conversation, or one visit in person! It’s those conversations . . . it’s those 16-story bungee jumps, or Batman rollercoaster rides, or the Big Bad VooDoo Daddy or Beach Boy concerts … the makeup appointment that sent us into fits of laughter . . . or the brunch after shopping together at Rodeo Drive.  I stopped writing for two years after she died . . . then I remembered she was my biggest fan and my worst critic when it came to my writing. She had an unending faith in me – she knew I could do it!  I knew she’d be so disappointed in me if I had quit because of her.   I miss my sister every single day . . . but she’s with me every time I sit down to write.

That brings me to why I’m sharing this ‘intimate moment’ with you.  Do you have a sister?  A brother?  Have you let getting busy and life get in the way of nurturing that relationship?  Might I suggest you stop for a moment and think what you would feel if you lost that sister or brother?  You can’t bring them back -  so you can do it differently this next time.  Give it some thought – you are so blessed to have the opportunity to create memories with them.

Email ThisBlogThis!Share to TwitterShare to FacebookShare to Pinterest
Labels: my sister my friend, sisters

Your post stirred emotions in me that I've tried to quell for a long time. Over three years ago, I lost my sister...not in death but because something I did made her write me off. Her last words "you're dead to me," still form a big question mark over my head. I have no idea what I did that angered her so, and believe me, I've replayed that telephone conversation over a million times in my mind. Sometimes you have to move on, and I've done that, but your post today is still a reminder that there is gaping hole where someone I once loved used to stand. I hope you'll let me fill that space for you, Rita, whenever you need a sister. I couldn't love you more if we lived next door and had met face-to-face.

Well, sister, nothing would touch my heart more. I never understood the ... I'm spittin' mad ... and you should know why. HER loss... and shame on her. I know you - and I can't imagine how hurt you must be. Hopefully she'll wake up one day and it will hit her how foolish and wrong she's been. Send her this article in an envelope... and jot on the bottom ... 'miss you' ... it's hard when we aren't the one who started it - the rewards would be worth the effort. :) I'm here for you day and night and I'd be honored and proud to fill the heels of being your sister. Love you. Rita