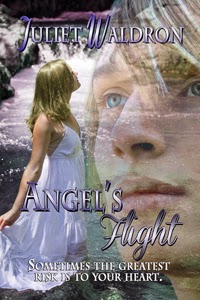 Angelica and Jack’s sail aboard the The Judik ends when they are caught at a Hudson River port by British warships. The British know that The Judik is carrying powder for the American army. The runaway couple and the Patriot soldiers who are with them have no choice but to “head for the hills”.

The path they followed was a series of switchbacks, a footpath clinging to the rearing promontory. For a moment the entire line stopped while everyone stared with horrified fascination at what was going on below. The ships carrying the British flag were so much larger. They surged toward the rebels.
Streaks of red and puffs of blistering white illuminated the cove while the sun slipped away. The roar of cannons ricocheted back and forth between the high cliffs. One little ship exploded in a cloud of slow motion splinters. Almost before these had finished falling, its broken bow slipped beneath the Hudson’s green surface.
“Get moving, you fools!” This was Captain Van Dam, waving his arms frantically. “We can’t be caught!”
With much stumbling and rattling of rocks, the column moved again. Everyone understood the danger, but it was almost impossible to turn away from the scene on the river.
Clods of dirt and stones rattled from above, startling some of the horses at the end of the line. There was a constant fear of being kicked. Angelica stubbed her toes and staggered, trying not to fall. In the summer twilight, everyone was stumbling and cursing. Sparks flew as horseshoes struck rock.
Fearsome roars and flashes rose from the river. Finally, a rising red tide washed over them and, helplessly, everyone paused to look back. Angelica saw ships sailing fast toward the shore. Behind them, the sails of a two-masted ship too large to escape over the boom made a magnificent pyramid of fire.
“The Judik!” Angelica’s heart thumped her ribs.
“Yes,” Jack said. “Hurry!” he shouted to those who, gaping down at the river, blocked the trail ahead. “They’re coming after us!”
As they reached the top of the bluff, the tempo and size of the explosions on the river multiplied. Flames had reached the powder still stored on board the ship. Angelica, her sides aching from the steep climb, looked back. The Judik was the center of a whizzing, smoke-trailing fireworks display. The entire gorge glowed and rippled red as if the hills were melting into the river. The British were painting the world—Angelica’s world—with fire!
“Run! Damn it—run!”
The time was past for formalities. Jack’s arm caught her around the waist, and he rushed her up and over the final rise. Tongues of fire danced behind them.
Then, with an earsplitting roar, a sound that surpassed any she’d ever heard or imagined, the end came for Vanderzee’s ship. There was a blinding light, while the concussion staggered those who had lingered to watch. Men and animals screamed in fear. Jack threw his cloak around Angelica like a wing, pressed her close against his chest and rolled with her to the ground. When the raging incandescence passed, they were clutching each other in a bitter twilight that tasted of gunpowder.

Email ThisBlogThis!Share to TwitterShare to FacebookShare to Pinterest
Labels: A Page Straight From, Books We Love, Dishin' It Out Wednesday Feature, Juliet Waldon

Wow! Superb scene filled with action and danger. It should hook the reader.