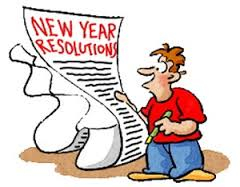 As we move into the first few months of 2015 . . . I wanted to share four tips from Dan and Chip Heath (authors of Made to Stick and Switch) on sticking to your New Year's resolutions.  It seems everyone addresses the New Year Resolution in January … and by March it’s already slipping ~ because January is still a pressure month.
I prefer to take a break – and address my resolutions in March ~ after I’ve had a chance to let the New Year settle in.  J


To learn more from the Heath brothers visit: http://heathbrothers.com/

4 RESEARCH-BACKED TIPS FOR
STICKING TO YOUR NEW YEAR'S RESOLUTIONS

Every New Year brings two proud traditions: Making resolutions and then, shortly thereafter, breaking them. Often the full cycle doesn't take more than a few weeks, which allows well over 11 months to plot the next year's resolutions.

The research on resolutions is damning: A study of 3,000 people led by Richard Wiseman, of the University of Hertfordshire, found that 88% broke their resolutions. (Even people who resolved merely to 'enjoy life more' failed 68% of the time.)

If you want to buck humanity's sorry performance record, here are four research-based tips to improve your chances of keeping your resolutions:

1. Look for your bright spots.

Nwokedi Idika, an American graduate student in computer science, was a chronic procrastinator. He'd set a goal to work six hours per day on his thesis but found that he only hit the target sporadically. Rather than bemoan his failures, though, he examined his bright spots: What is different about the days when I do manage to complete my six hours? And what he discovered was that, in almost every case, he'd been working early in the morning. So he turned that realization into a strategy: He started setting his alarm for 5:30am every morning.

The early-morning approach worked like a charm. 'When I'm up that early, I have no motivation to check email, Facebook, or Twitter because nobody is up to send email or update his/her status,' he said. He defeated procrastination by cloning his bright spots. (Idika became the first African-American student to earn a PhD in computer science at his university.)

Over the last 15 years, a series of studies in psychology has confirmed a sobering result: Our self-control is exhaustible. The research shows that we burn self-control in many different situations: when controlling our spending; holding in our emotions; managing the impression we're making on others; resisting temptations; coping with fears; and many, many others.

Why is this important? Because any life change will require careful self-monitoring and self-regulation--in other words, self-control. Self- control is the fuel that allows change to succeed, but it is limited. For that reason, you will have a better chance of success if you can focus on one change at a time. If you try to change jobs and exercise routines and relationship habits all at once, you are more likely to stall, because you've run out of 'fuel.'

3. Turn that one change into a habit.

Steve Gladdis of London found that he was constantly falling behind on his personal 'to do' list. 'Looking at the list on my phone now,' he said, 'I need to hang those pictures, phone a friend I haven't spoken to in a while, extract that box from the back of the shed, investigate child-friendly mousetraps, the list really does go on and on.'

He resolved to create a daily routine: Every morning, like clockwork, he'd finish one task. 'Once I'm on a roll, it seems easy to carry on. I remember to look at my list for today's task because I'm used to doing it, and I almost look forward to ticking off that day's chore,' he said.

Habits are effective because, once established, they no longer burn self-control. (Think about how little mental energy it requires to take a shower, or make your morning coffee, or to carry out any of the other habits you've acquired.) You'll be more likely to keep your resolution if you can turn it into a habitual behavior--something that happens in the same time and place on a regular cycle.

4. Set an 'action trigger' to start your habit ASAP.

What's the best way to start a habit?

Let's say you're trying to exercise more. You might declare to yourself: Tomorrow morning, right after I drop off Elizabeth at dance class, I'll head straight to the gym for my workout. Let's call this mental plan an 'action trigger.' You've made the decision to follow a certain plan (exercising) when you encounter a certain trigger (the school's front entrance, tomorrow morning).

Action triggers like these can be surprisingly effective in motivating action. The psychologists Sheina Orbell and Paschal Sheeran studied a group of patients in England with an average age of 68, who were recovering from hip or knee replacement surgery. Some of them were asked to set action triggers for their recovery exercises--something like, 'I'll do my range-of-motion extensions every morning after I finish my first cup of coffee.' The other group did not receive any coaching on action triggers. The results were dramatic: Those patients who used action triggers recovered more than twice as fast, standing up on their own in 3.5 weeks, versus 7.7 weeks for the others.

Psychologists have compared action triggers to 'instant habits' because what they do, in essence, is make our behavior automatic when the trigger moment comes. Seize that power for yourself: Jump-start a new habit by setting an action trigger.


Psychologists tell us that we are wired to look at the negative. One famous study concluded that, when it comes to the way we think, 'bad is stronger than good.' So when it comes to changing our lives, we'll tend to ask ourselves, 'What's the problem and how do I fix it?' But often we can benefit more by asking a different question: 'What's working and how can I do more of it?' In other words, we can learn from our own 'bright spots.'
Posted by Rita Karnopp at 11:00 PM