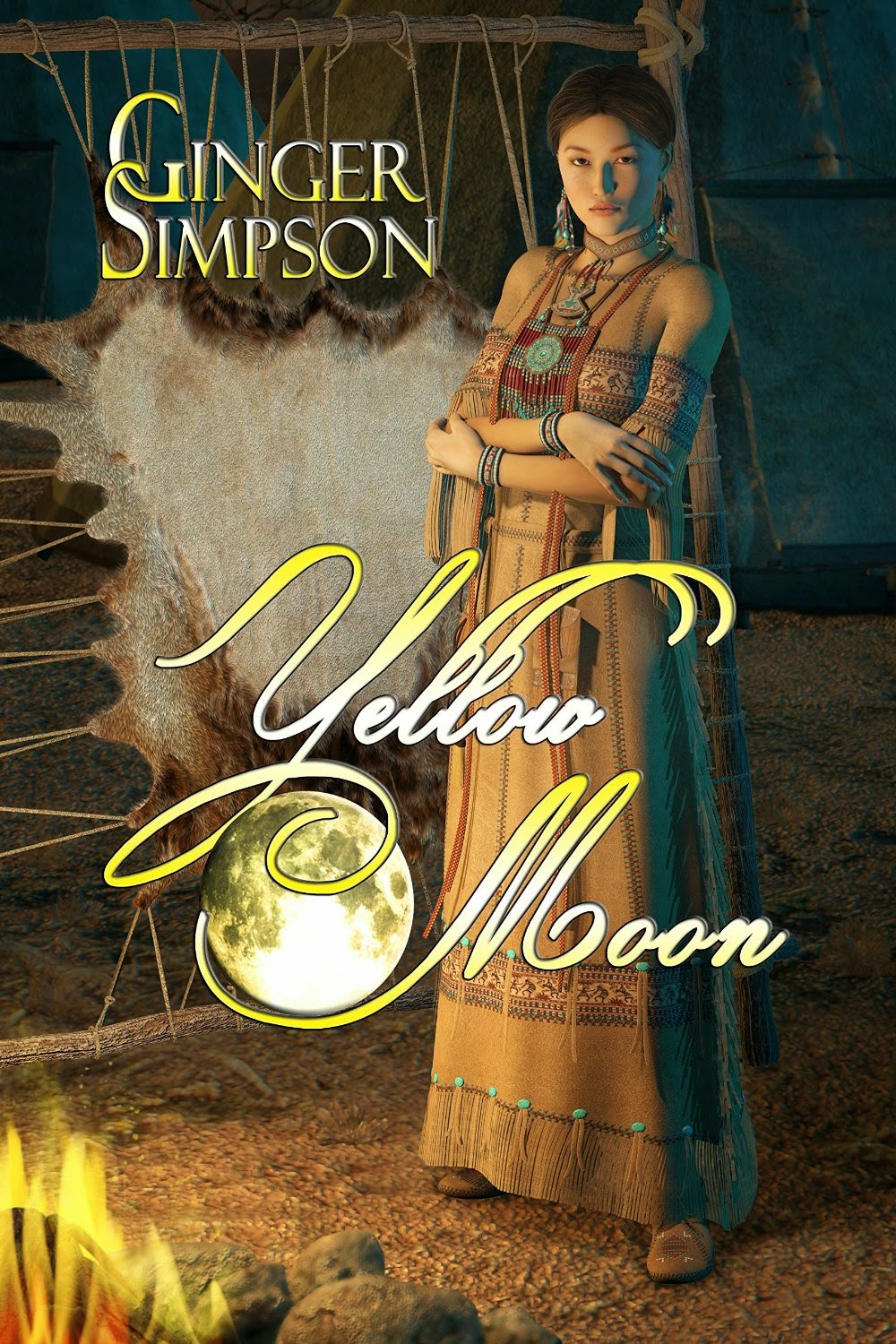 A thunder of drums created a steady melody. Male dancers, most dressed only in breechclouts, knee-high moccasins and wearing a variety of feathered headdresses, stomped in time to the beat around a roaring fire in the middle of the compound.  On this, the first night of the Sun Dance festivities, Yellow Moon sat with her family in a large circle comprised of members from other tribes who had traveled great distances to pay homage to the Great Spirit.  Her focus was more on meeting Thunder Eyes than the celebration and the pleasing aroma of roasting meat wafting in the air.  She swiped her damp palms down the skirt of her dress.

Her mother sat to Yellow Moon’s left, next to Walking Tall. Dressed in fringed buckskins, he wore one eagle feather draping down the side of his silver-streaked hair, his back straighter than the arrows he carried in his quiver.  The firelight reflected ebony eyes that stared forward.  Yellow Moon’s pride knew no boundaries.

She had changed into her favorite doeskin...the one her mother had adorned with colored beads. Even her younger sister and brother sparkled like the cherished new penny Father O’Brien had given her. He’d said the coin promised good fortune, and she’d hidden the treasure in her moccasin.  A wayward stone poked into her skin.  She reached beneath her leg, found, and tossed aside the offending pebble. Maybe the penny’s lucky power had nothing to do with discomfort.  Still, she cherished the gift from a beloved friend.

Casting aside those pleasant memories, Yellow Moon glanced down at her dress then to her mother.  “Maybe we shouldn’t sit together. You look more like my sister than my ina. We are even dressed alike.”  Yellow Moon giggled and smiled. “Maybe I should worry that Thunder Eyes will find you more attractive than….”

Her mother clucked her tongue against her teeth.  “Such a silly daughter you are.  I am already married and have birthed three children. Clearly, Thunder Eyes asked after you.” She cocked her head and returned her daughter’s smile. “Why would he want an old woman like me?”
“Old? No one would ever guess you near your forty-third summer, Ina.  Your skin is smooth unlike other women your age.  I hope I am as blessed.”

Her mother’s gaze returned to the dancers, her fingers keeping time to the sound of each ‘hi-ya, hey-ya, hey’ sung in accompaniment to their movements.  The drummers sat separate from the circle, their faces bearing colorful paint and their hands moving in unison with one another.  The constant tempo sounded in Yellow Moon’s chest and kept time with her pulsing heart.  Despite reminding herself to be composed, nervousness danced along her spine like flames charring a log.

Conversation of aging forgotten, she craned her neck, searching the crowd, but then realized her suitor was supposed to be unknown to her.  She relaxed and turned her gaze to her mother. “Do you yet see Thunder Eyes, Ina?”  The innocence in her voice sounded convincing even to her.
Her mother’s gaze didn’t sway from the entertainment. “No, but I am captivated by those who dance tonight.  Did you know their movement tells a story of a hunter’s kill?” She patted Yellow Moon’s knee. “You showed very little excitement about Thunder Eyes earlier, I’m surprised by how anxious you are now.”

For fear of discovery they’d already met, Yellow Moon had dared not ask too many questions when her mother had announced Thunder Eye’s request, but now that an official meeting with him had been approved, she had many queries.  Her subtle gaze darted from face to face, searching.  Her mouth turned dry, and unwanted images played in her mind.  What if he’d found another who interested him more? Her stomach felt as though a stone had settled at its bottom.

She recalled her encounter with him at the river, and worried she hadn’t made a good impression. Memories of brushing his arm sent shivers through her again.  Had he felt something similar? Why would he have asked permission to meet her if he didn’t find her appealing?  Doubts clouded her mind and kept her from enjoying the festivities.

Thunder Eyes had been on her mind all afternoon, and those muscular arms, copper chest and deep voice should be reserved only for her. She took a deep breath and struggled to put aside thoughts of him with another. The bitter taste of jealousy in her already dry mouth made it even more difficult. She blinked back tears—foolish tears, she told herself.

Yellow Moon is availabe on my Amazon page.

Email ThisBlogThis!Share to TwitterShare to FacebookShare to Pinterest
Labels: A Page Straight From, Books We Love, Dishin' It Out, Ginger Simpson, Historical, Western, Yellow Moon