Another Blog-jacking from Shanna Hatfield

I'm on vacation with limited Internet access, so today I've stolen this blog.  :) (with permission of course.)

The latest installment in my Pendleton Petticoats series releases this week. In the story, Millie Matlock is leading the local Women's Christian Temperance Union to drive the saloons out of town. Gideon McBride is a saloon owner who also happens to be the one man who turns Millie's head.

The story is set in 1908, when the citizens of Pendleton, Oregon (along with the rest of the county) voted to go "dry" and bring prohibition to the area.

As I started digging into the research, I couldn't help but question why a town that boasted more than thirty saloons and nearly 18 bordellos would suddenly decide to go dry.

In truth, I never found the exact reason why prohibition became an issue. Although Pendleton had a population of 4,406 and was the fourth-largest city in Oregon in 1900, it  catered to the surrounding communities as an "entertainment hub." Cowboys, wheat harvesters, sheepherders, railroad workers, miners, and crews of men who descended on the town to work could find quite an assortment of places to drink, play cards and visit soiled doves.

In late spring of 1908, articles began popping up in the newspaper about the possibility of prohibition. A special voter’s edition of the Pendleton newspaper was published May 22, 1908. It urged voters to consider the financial impact prohibition would have on the town. 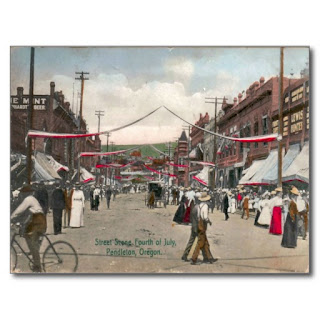 According to the article, the city would lose more than $23,000 in liquor licenses alone if prohibition came to town. With rent, salaries, and other expenses, it was estimated the abolition of liquor business would leave a deficit of approximately $270,000 (around $6.6 million in today's economy). Not only would prohibition create a significant loss of income, it would leave thirty businesses empty and a few hundred people seeking a new means of support.

When ballots were cast in the June 1 election, prohibition passed in Umatilla County, but also in three neighboring counties as well.

The saloon owners had until June 30 to close their businesses. According to newspaper articles, the saloons went out of business without much fanfare on June 30, 1908 (several closing at midnight) and only one man was arrested that night.

A group of saloon owners did their best to have the vote declared illegal, citing an improper navigation of voting protocols. Other than running up attorney's fees, nothing came of their efforts.

Although Pendleton went "dry," twelve saloons were allowed to retain their liquor licenses and remain in business. The how and why those twelve were given special treatment is lost to history.

In years between then and the time when prohibition officially ended across the nation in 1933, many underground drinking rooms and escape tunnels popped up throughout Pendleton. 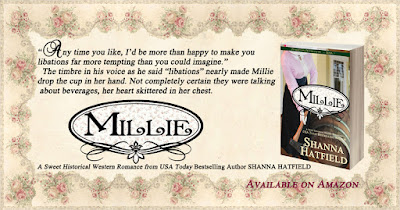 He watched as Millie sipped her hot chocolate. As soon as she lowered the cup from her mouth, he took it from her, placing his lips in the exact spot hers had been. While he tasted the rapidly cooling drink, he stared at her over the rim of the cup. His green eyes locked on hers as he handed the cup back to her. “That’s not bad, but I like a pinch of cinnamon and a dollop of whipped cream in mine.”

In a huff, she scowled at him. “I don’t recall offering to share my chocolate with you.”

“Oh, what’s one little sip between friends, Miss Matlock?” Gideon laid on his charm, smiling in such a way it did great justice to the dimples in his cheeks. Ever so slightly, he bent closer to her and lowered his voice. “Any time you like, I’d be more than happy to make you libations far more tempting than you could imagine.”

The timbre in his voice as he said “libations” nearly made Millie drop the cup in her hand. Not completely certain they were talking about beverages, her heart skittered in her chest.

Unsettled, her gaze shot to his, yet he continued to smile in an amiable, almost boyish manner, appearing innocent of any indecent implications. 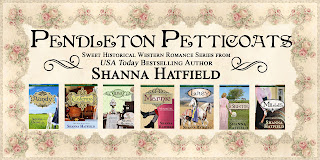 Convinced everyone deserves a happy ending, USA Today best-selling author Shanna Hatfield is out to make it happen, one story at a time. Her sweet historical and contemporary romances combine humor and heart-pumping moments with relatable characters. When this hopeless romantic isn’t writing or indulging in rich, decadent chocolate, Shanna hangs out with her husband, lovingly known as Captain Cavedweller.
Find Shanna’s books at:
Amazon | Amazon UK | Barnes & Noble | Smashwords | Apple
Shanna loves to hear from readers. Follow her online at:
ShannaHatfield | Facebook | Newsletter | Pinterest | Goodreads | You Tube | Twitter
Posted by Unknown at 11:30 PM