Ain't Afraid of No Goat 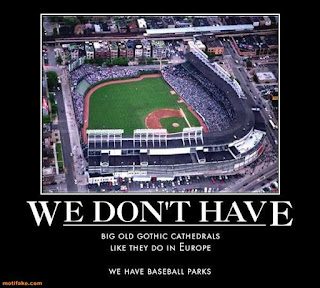 I am a baseball fan. More to the point, I am a long-suffering Cubs fan. This appearance by the Cubbies in the World Series is a very long time coming. For historical perspective, the last time the Chicago Cubs won the World Series--the Titanic hadn't sank yet, the Great War (WWI) hadn't even started, the Ford Model T just started rolling off the production line, and sliced bread hadn't been invented. The last time they appeared in the World Series, WWII had just ended. My dad used to joke that any team could have a bad century and he also said at the beginning of each season until we could figure out how to reverse the curse of that dang goat, it was going to be another looooooong baseball season.

Cubs fans have kept the faith. For more than a century, they have said, "Next year;" they remained loyal; they wept bitter tears when season after season hopes were dashed on the brick and ivy of Wrigley Field; and in my case, endured the torment and teasing of living in a household full of White Sox fans. Even my own son is a White Sox fan who enjoys tormenting me with truly tasteless memes about how long it has been for Cubs fans. It’s a good thing I really love the boy. 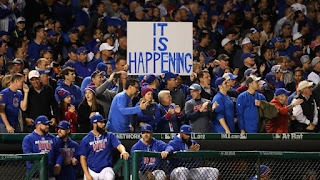 This season, the Cubs had the best record in either league with 103 regular season wins. And, unless they can win the World Series, that record will just be a small asterisk that ultimately means NOTHING. If you ain’t got that ring… 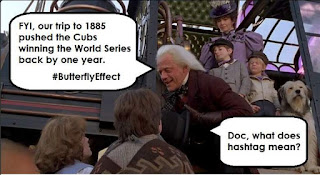 Every time I went to Wrigley Field, my "lovable losers" did just that. They lost. Every time I have watched a game on television, they lost. Every time I have cheered for them, they lost. My kids call it "Momma's curse" and they used to tell me which team to cheer for so the team they really wanted to win would. My son—the same one who torments me about my Cubbies—says it’s a kind of black magic. (Insert mysterious grin here…) I have refused to watch my beloved Cubbies all season for this reason. I have refused to even listen to them on the radio because I couldn't help myself and I was cheering for them. So, I will not watch any of the World Series.

However, I will cheer--for the Cleveland Indians. Sorry, Cleveland fans. Not sorry.
Posted by Lynda at 10:00 PM