"Classic Ginger" HER Body, HIS Nightmare...Culture Shock by Ginger Simpson 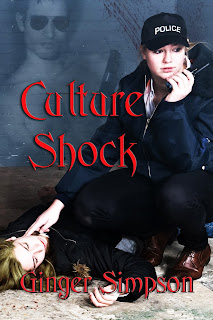 Cynthia massaged her temples. "God, there's too much to remember. You can't expect me to store all that information in my brain. You went to an academy for months to learn all this stuff..."

Suddenly her eyes widened. "I'm not going to have to shoot a gun am I?"

"No! I've never even taken mine out of the holster. Don't worry. You'll do fine. Just remember the basics. You'll be surprised how things sink in even if you don't think they did. You'll remember what you need to know when you need it."

"That's easy for you to say. I'm the one that has it the toughest."

He scrunched up his face. "You? How can you say that? I haven't the first idea about how to be a woman, and we all know how complex they are."

"We are not! Being feminine is very simple. Let me show you."

She struck a pose that looked ridiculous and walked across the room. "The walk is the most important thing. Take small steps and lead with your hips. Let them be your guide.''

Alex's flinched at the sight of his masculine frame sashaying around the floor. Even more annoying was the way she made feminine gestures with his hands.

He rolled his eyes. "There's no way I can walk like that, and I wish you'd stop. You're making me look ridiculous. Promise me you won't walk like that as long as you have my body." He jumped to his feet. "Real men walk heavy and hard ... and pull your shoulders back." He grabbed her forearms from behind, forcing her chest forward.

She jerked out of his grasp, turned and glared at him. "Don't worry. I'll play up the macho thing, but I want to see you walk like I just did."

He blew out a loud breath then reluctantly took one step, then another. The swivel didn't come naturally, but he tried following her example. Having a woman's form and a man's thought process was tough. The two didn't work well together. He walked across the room then turned. "Well, what do you think?"

"I think you look like someone who just had casts removed from their broken legs. But, we'll keep working on it. I also need to show you how to sit properly, drink with poise, and how to be graceful."

He grabbed two handfuls of her blonde hair and yanked in frustration. "Just kill me now."

"I can't. You promised I wouldn't have to shoot anyone, and I don't want to be the first to un-holster your gun." Her giggle sounded forced.

He sagged down on the sofa. "I guess I'll be spending the night again. Looks like we have a lot of ground to cover."

http://www.amazon.com/author/gingersimpson
Posted by Unknown at 11:30 PM