My Day To Romance February

If you've been playing along, you recall that I'm part of twenty-eight authors participating in Romancing February. Today, it's my turn to select a way to honor love. So, I've given this a lot of thought and decided...

I need to know that I didn't marry the only man who isn't a 'smooth talker.' I want proof that I didn't get the only Prince of Enraging Endearments, the King of Klutzy Compliments, the Jaw-dropping Jerk. I think you get the picture. So,please stroll through your memory bank and come up with the most 'left-handed' compliment or comment you ever received from your significant other, or even teenage boyfriend.

Just to give you an idea of the things I've heard:

When we were dating, we were having a heart to heart about our past relationship success and failures. Things were going fine until he pointed out that through a discussion with a lady friend, he determined he had been setting his sights far too high until he met me.

If that's not enough, how about this one. "I don't usually date women with thighs as big as yours."

And I married him anyhow, but I showed him. They're double the size they were when we married. *lol*

So, click here and email the best of the worst to me. I'll pick a winner and announce it here. Here's a picture of the prize. 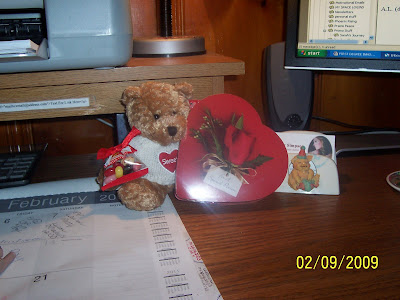 Your next stop for Romancing February is Anne Carrole
Posted by Unknown at 4:00 AM

Hi, Ginger! Well, it wasn't really an insult. Rather, the comment came after my expensive back surgery with bills spanning two years given the therapy. And then I got pregnant 6 months after surgery (we waited for the okay from the doc!). But my husband said he should have got a dog. In other words, I am too expensive. LOL. When he starts moaning about money now, I just note she should have got a dog. Although, we laughed the first time the comment was uttered, he just looks at me now. And, he probably wishes he hadn't said it! :) Turnaround's fair play, eh.

Hi Ginger,
What a fun contest! I remember many, many yers ago when we first got married, I was holding my 9 month-old baby brother for a wedding photo. My husband said, "You'd better put him down, or people will think he's the reason we got married!" It was rather funny at the time!

I can't recall a comment per se, but my daughter relentlessly teases my husband about how unromantic he is--not noticing my new hair do or a new outfit. My daughter is Miss obeservant and notices everything. But you know, my hubby is the kind of guy that makes me tea every night, tucks the covers around me and him to make sure I won't get chilly, surprises me with my favorite donut when I'm feeling overwhelmed and won't leave the house until he finds me for his kiss good-bye in the morning--to me that's very romantic.

I don't remember anything. My husband told me before we were married I had pretty eyes. Poor guy, that's all it took and I was putty in his hands. lol My favorite phrase is "Is it hot in here or is it just you?" (shrugs) I see a lot of hot men. lol

I love this topic! too funny. Ok, so here goes.
While we were dating, hubby and I were looking at a ctalogue from an excellent leather goods store. Leather vests, coats and pants. So, flipping htrought he pages, dear hubby stops and says, "Those pants would look really good..." I am gearing myself up for a complement on how leather would look good on my long, sexy legs when he finishes the statement with the fatal words..."My butt." All my hopes of a compliment were dashed in an instant. LOL! I guess those are the breaks when you marry an actor!

Mine wasn't deliberate - but boy I'm making him suffer for it.

We were discussing what we would do if the big 'deal' came through finally. My husband said he would peel back the years a bit and have some plastic surgery which he had researched would cost about £10k. I asked if that went for me too and could I have £10k worth of plastic surgery as well.
'Darling, you can have £20k worth if you want.'
He spent the next ten minutes saying, 'What? what?' while I sulked and another ten before the penny dropped.
Anita

Hmm, seeing as how I'm in the middle of a divorce, it just doesn't seem fair for me to play at this game - all I can remember now are those not-so-nice comments. LOL! But it's great reading everyone's stories!

Hi Ginger,
What a cool topic, but I have to say, although my hubby voices few compliments, he does other things to prove his love...like dipping me a big bowl of ice cream and smothering it with cashews and peaches...he did this after our first child was born and I was shocked...I'd came out of a very unhappy marriage four years earlier and was not used to a man doing anything for me...I think I cried I was so shocked...and you know what? After over 30 years together, he still does these little things that means so much to me...Tabs

Fun to read all the comments. Good topic, Ginger.

One insult I remember is when my husband read a story of mine, looked up and said, "Now, that's good."

This after having read countless other stories with no comment. I was left to read between the lines. :-)

Hi Ginger,
I have a habit of saying, if I make some smart suggestion, "See, I am not just a pretty face" of course meaning, I'm smart too. Hubby ofen says, with one of those horrible smirks on his face, that you feel like wiping off with the back of your hand. "Really, have you looked in the mirror lately?"
Margaret

The one remark I remember all too well was when he and I were going to dinner and movie. We hardly ever go out, so I put on a nice dress. He looks at me, all prettied up, and says "Where the hell are we going?." He hardly ever tells me I look nice when I'm dressed up. But after nearly 22 years of marriage, I'm used to it....almost.

Being a male, I'm staying clear of this one.

I already had married him and only in the past few years since my weight went from a slim 125 then to 145 and now residing at 188 he'll make a comment when I'm leaning over to pick something up like: move out of my way, newsstand.

Gee, how cool is it to be referred as the corner freestanding newsstand. hmmm...

Wow! This is an interesting topic of thought. And of course, when put on the spot, I can't think of a single backhanded compliment from my One-And-Only.

I suppose buying lingerie two or three sizes too small might be construed as backhanded, or wishful thinking on his part. He just doesn't pay attention to the FACTS.

Some of the other comments here are simply priceless.

How about this? It's not really what someone said to me, but to a friend of mine when we were in high school. She was dating a boy who she was having a truly serious relationship with. One day, he was in a super romantic mood and he said to her ............ "I'm glad you're not a horse!" Huh?

Thanks to everyone who commented, and those who actually followed the directions and emailed me. *lol* Actually, I'm glad you posted here so people could share the glee. I've had a few giggles today from your comments. I do have to say that I'd much rather get lingerie in small sizes rather than my my Flannel Christmas Pajamas in size 2X...and he thought they looked too small. He was surprised when they bagged on me. *lol* I'll announce the winner tomorrow. I have to sort through these. :)