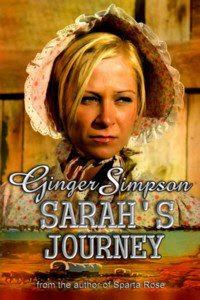 I'm pretty sure this is the first review I've had done by a male peer, and I was quite pleased that Rob Appleton ventured outside his "comfort" zone and picked my book to read. We exchanged comments about the ending, because, clearly, when I wrote this book, I knew people would either love or hate a veer from the norm, so I truly understand his comments. Once I explained my reasoning, I think he agreed I had done the right thing. The other reviews I've received, to my great surprise, have supported and praised Sarah's conclusion. I'm so honored that he enjoyed my work. If you haven't read any of Rob's books, you're missing a great treat. Like Sarah's Journey, you can find them at Eternal Press

Sarah Collins awakens to a scene of utter carnage. Everyone in her wagon train headed for California has been slaughtered during a savage Indian raid. Weak and dazed, Sarah finds one survivor, her best friend, and sets about trying to revive her. But the poor woman’s arrow wound is mortal. She dies. Sarah is now completely alone in the world—homeless, penniless and stranded. In scene after scene of arresting pragmatism, we come to know Sarah not by her misfortunes, but through the resourceful ways in which she deals with them. This is a woman of her time, an upstanding, God-fearing daughter of pioneers, and she is going to survive.

Soon after starting her journey back to civilization, Sarah happens on the body of a (seemingly) dying Indian. Irony rears its head and bites her—in the form of a rattlesnake—when she tries to take his horse and ends up in his care. He slowly nurses her back to health. Against all odds, on the road to Independence, an unspoken attraction develops between the two. His name is Grey Wolf. He is a handsome man of mixed blood—his father was white, his mother was Indian—who sees the world through eyes every bit as pragmatic as Sarah’s. Will their true feelings for each other win out? What will happen when they reach Independence?

Sarah’s Journey is a heartfelt Western romance that doesn’t merely settle for being a romance. Its themes of intolerance and defining one’s own identity are prevalent throughout. The protagonist is a sensitive yet uncompromisingly moral woman, a spinster on the verge of love. She is by turns abrasive and adorable, and particularly in the final third of the story, adorably abrasive. For Sarah, equality is not an ideal but an absolute. Woe betide anyone who suggests otherwise. Yet for all her forthrightness, the biggest obstacle she faces is in her own heart—forbidden love.

I thoroughly enjoyed Ms. Simpson’s recreation of Western life. The word that kept coming to mind as I read this story was uncompromising. Little is omitted, whether it be gruesome wounds, the preparation of herbs and food, Sarah’s body language, or the precise terms for the different noises made by a horse. I loved seeing all this research come to life. The author’s passion for the period and particularly for her characters shone throughout. This was clearly a labour of love. The only quibble I had was with the ending. I suspect many will lap it up, but I found the concept more compelling than the execution. I was hoping for a more bittersweet denouement. Nevertheless, it took a brave writer to end her novel that way. And having never read a woman’s western before, I can say unequivocally that Ms. Simpson, like her heroine, has real gumption.

and now in paperback at Amazon!
Posted by Unknown at 5:00 AM