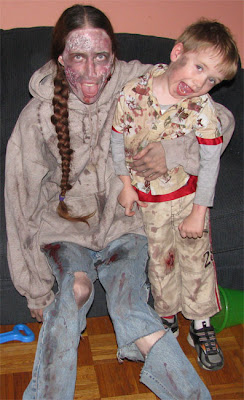 Robin Wolfe writes erotica and her first book, Ink Me, is being published this December by Eternal Press. Her home on the web is www.robinwolfe.com, and here she shares an unusual way that she and her autistic son have fun.

For most of us, crowds of people aren't that big a deal. We may find them annoying or inconvenient, perhaps even obnoxious, but they aren't a serious problem. They're something we push our way through or navigate around, and then it's over and we're on to tackling the next obstacle in our day.

My five-year-old son, Gavin, is not like most people. Crowds freak him out on a primal level. There's a very good reason for his nervousness: he's autistic, and has to deal with sensory sensitivities. For him, navigating through a crowd of people is an experience that few of us will ever understand. 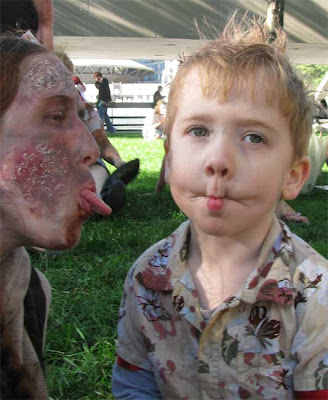 The first thing he has to cope with is auditory sensitivity. What this means in practical terms is that sounds at normal volume can be upsetting for him, because he hears them louder than most of us do. Sounds that we'd find loud usually leave him cowering, covering his ears, and high-pitched sounds are even more painful for him. Our apartment building's fire alarm is like the boogeyman and Freddy Krueger all rolled into one for that child; the blare of the alarm will cause him to hide under our duvet, sobbing and hysterical.


In addition, he also has some visual hypersensitivity, which means he sees things in a much more intense way. I can't really describe it because I don't know exactly how he sees things, but certain patterns - for example, the raised grid of a manhole cover - are incredibly exciting and stimulating for him. The problem is that when he gets overstimulated (through too much auditory or visual input or both) another sensitivity kicks in: procioceptive hyposensitivity. Procioception is your awareness of where your body is in space, and the boundaries of your body. Now, notice that his procioception is hypOsensitive, not hypERsensitive - that means it isn't as strong as it should be. So when he starts paying too much attention to what he's hearing and/or seeing, he'll suddenly lose his ability to feel parts of his body. This is about as upsetting and panic-inducing as you'd expect, and he'll start flailing and pushing to re-establish sensation to his body. This is obviously a problem when there's people around, because whoever is in his vicinity will probably get injured.

These days life isn't particularly stressful on a daily basis, because we've figured out a lot of accommodations. For example, he's in a smaller class at school, in a classroom designed for autistic kids (so it reduces visual input and has a strong emphasis on routines, etc). Our home is set up to reduce overstimulation. If we're out on a walk and a fire truck starts heading our way, he'll stop while the truck is still at least half a block away and put his hands over his ears. 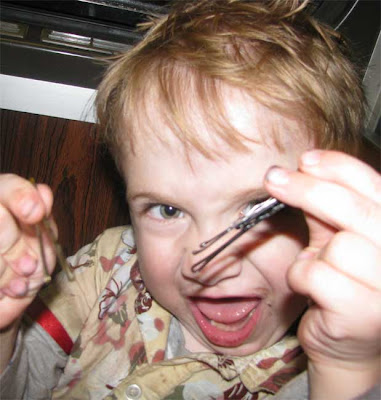 Do you have a Zombie Walk in your city? It's essentially a parade of the undead. Anywhere from a few dozen to several hundred people gather at a public location, all dressed as zombies, and then they lurch their way to another location, confusing and amusing passersby on the street. Plenty of cities have them now, but my city, Toronto - has one of the very largest Zombie Walks of any city worldwide; last year's Walk had well over a thousand people.

And my autistic son, who goes into a flailing panic when surrounded by twenty other children in a classroom, somehow has no problem with this. No, it's more than that: he loves it. For weeks before a Walk he'll be giving me a running countdown: "Twelve more days until the Zombie Walk, Mama!" When the big day finally arrives, he wakes up early in the morning, impatient to get going. It's not quite at the excitement level of Christmas, but it's close.

I can't explain it. More than a thousand people, all covered in Liquid Latex and fake blood, moaning and shrieking, "Brains!" periodically... and there's my child, right in the middle of it all, having a blast. There's makeup and strange sights and people moving in erratic, unpredictable ways. You'd think that for a child with his sensitivities, a Zombie Walk would be like something out of a nightmare. Hell, for most neurotypical (average/non-autistic) children, a Zombie Walk would be something out of a nightmare!

And yet, the Zombie Walks are among his very favorite days of the year. Now, I'm not saying that he magically becomes non-autistic. We still need to take his autism into account; for example, getting dirt on himself sends him into a panic, so we need to have clean clothes on him (underneath his dirtied-up zombie clothes) and his makeup needs to be minimal. But being at the Zombie Walk does something positive to him, that's for sure.

I see him doing self-soothing behaviors, such as dancing to re-establish his body when he starts feeling disconnected. And he'll make sure to carry "comfort objects", which are small items he can carry in his hands so he can focus on those when everything else is too overwhelming. But the fact that he can do that at all is remarkable, since usually he's not self-aware enough of his emotions to realize when things are getting too stressful. Something about being at a Zombie Walk puts him more in touch with his internal state, and he's able to help himself better. What is it about being in a crowd of a thousand zombies that allows him to have more understanding of himself? I have no clue.

The only conclusion I can draw is that my child is, in fact, awesome. Or maybe he's part of the impending zombie apocalypse, and being among "his people" at a Zombie Walk makes him feel better. I'll probably never know, at least not until the morning he wakes me up by tearing my throat out with his teeth.

I suppose there's worse ways to go. At least we'll be zombies together! 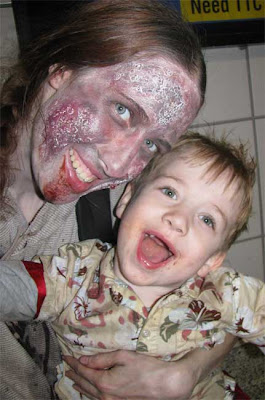 Yup, sheer awesomeness, on both your parts :D