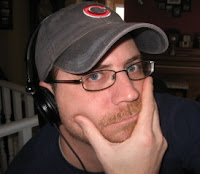 For my guest post here on Ginger’s blog, I’ve decided to tone it down a notch from my normal level of depravity and foolishness and talk about something appropriate for this setting: romance. (In some circles, this post would be defined as “pandering” to the crowd, but I find that appropriate given the upcoming elections.)

A couple things before we start:

2. That should pretty much tell you all you need to know right there.

What do I know about romance, right? If you dare to venture over to my Internet hovel, you’ll not find much in the way of romance, but I really can be romantic. To prove it, I’ll give you a great example. My wife of 14.5 years and mother of my two sons is an amazing woman. She juggles career with family as well as school, and does so with amazing grace and aplomb.

For many years, I have worked two jobs and just recently quit my part-time occupation of sports writing to focus on my fiction writing, as well as give her more of a hand around the house than I was able to before. She’s long told me she finds that sort of thing more of a turn-on than any romantic overture I could make, but I always figured it was more talk than reality. Then I learned the truth.

A couple weekends ago, I out-did myself. We have a garden, which is located in, basically, our front yard due to an odd property setup that leaves us with almost zero back yard. In this garden, we have grown many cool things, including cantaloupe, peppers, cucumbers, tomatoes, and even corn on the cob. The corn was last year, and it was not the greatest corn ever (read: undersized and bland-tasting) but I loved having six-foot tall rows of corn stalks in our front yard and the resulting odd looks from folks driving through our little patch of suburbia.

The tomatoes were especially successful this year. We finally reached a point of critical mass when we had nearly 40 ripe Roma tomatoes sitting on the kitchen counter. I stood there one Saturday morning trying to figure out what we were going to do with that many Roma tomatoes. The boys had already tried selling them out front in our driveway, and had nearly burned through our supply of regular tomatoes, but no one wanted the Romas. That’s when I was hit with inspiration – I decided to make a fresh spaghetti sauce with them. 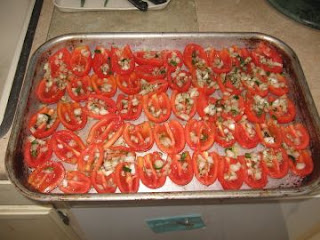 Firstly, I am not a cook. I can cook when called upon, but rarely do so, and almost exclusively keep to the grill rather than the stove. Secondly, I am not a spur-of-the-moment kind of person, even though my wife is and would love it for me to become one. So, when I announced my intentions out of the blue that morning, a look of doubt came over her. Was I serious? What did I know about making a sauce, especially from fresh tomatoes? What did I know about turning on the stove? Would I need help finding the kitchen? I saw all of these thoughts swirling in her mind, but I waved her off and told her to go back to her studying. 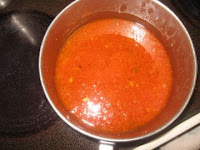 Long story short time – I did precisely what I set out to do. I found a basic recipe for making sauce from fresh tomatoes, added one or two little personal touches, prepped, baked, pressed, cooked, and served my sauce with hot Italian sausage over Angel hair pasta for dinner that evening. I even prepared the sausage and noodles myself, much to her added surprise. She occasionally would pop her head in the kitchen to see how things were going. What she saw was an efficient culinary machine, not only cooking, but cleaning up along the way, leaving no dirty dishes or mess to attend to once I was through.

The best part of the entire process (aside from the incredible smell throughout the house of slow roasting tomatoes) was the first bite. As we sat down to eat, there was still a slight hesitation, a look of apprehension on her face. I let everyone else taste it first and waited for their comments. The reactions went from cautious to confused to surprised to amazed. Not only did I do it from scratch, it tasted damn good. And trust me here, I’m not exaggerating. It was light, fresh, aromatic, and delicious. 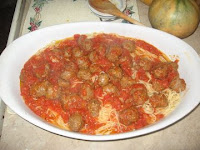 The best part was the look on my wife’s face. I knew I had hit a grand slam. As a gentleman, I won’t go into any further detail about how the rest of the evening went, or the kids’ early bedtime that night. I’ll just let everyone’s dirty little minds fill in the blanks.

So the moral of this tale, if there is one to be had, is that I didn’t have to buy gifts or a fine dinner out on the town or anything extravagant to show my wife a little romance. I just had to be a little creative for once.

And in case you’re curious, here’s the recipe I used for my spaghetti sauce:

Start with 35-40 ripe Roma tomatoes, depending on size. If you want enough sauce for at least 4 people, you need to completely cover the bottom of a large baking pan.

35-40 Romas, halved, de-seeded and placed skin side down in pan.

Mix together the following:

¼ cup (or to taste) finely chopped Jalapeno – I had some fresh from our garden and added it for the hell of it. Really gave it an excellent added flavor.

A bit of basil – another addition of mine, because I had it. Again, to taste.

Preheat your oven to 325 degrees. Pour your mixture over the Romas, being careful to evenly distribute it so all them ‘maters get some goodies on ‘em. Bake that for about 3 hours, or until they’re done. You’ll be able to tell because they’ll begin to shrivel, especially the smaller ones. Don’t let them get too shriveled. During this time, your entire house will smell of baking garlic and onions and tomatoes and your wife will wonder if she was suddenly whisked away to an Italian restaurant.

Press your tomatoes into a saucepan and discard the skins. I used an actual press (Google is your friend) because we have one. If you don’t have one, stop what you’re doing and drive to the store and get one. Mix in a cup of white wine, bring to a boil, then simmer for about 5-6 minutes. While that is cooking, chop up and brown a package of hot (or mild if you’re a wimp) Italian sausage in a pan, add the sauce to the sausage and let that simmer while you cook your pasta. Once the pasta is done, the sausage should be as well, and the whole thing is ready to eat. Serve with your leftover wine, if you didn’t guzzle the rest while you were cooking, glow in the warmth of your wife’s adoring gaze, and then get ready for some action later on.

You’re welcome...and if you'd like to find out more about me, "the author," please visit my website.
Posted by Unknown at 4:00 AM

Great insight into what constitutes romance. Thanks for sharing both the advice and the recipe.
I think the clean kitchen is the ultimate touch. Well done.

You're becoming a romance blog regular!

Sounds delicious and what a romantic gesture. Your wife is a lucky woman. I'm fortunate, my man cooks often and it is much appreciated, especially when I worked and came home to a nice hot meal that I didn't have to prepare.
Great post

Thanks everyone for reading and commenting. I'm already looking forward to next summer and more fresh sauce from our garden.

Thanks everyone for reading and commenting. I'm already looking forward to next summer and more fresh sauce from our garden.

Just wanted to follow up with a quick note that my book 'Muscle Memory' is now available for pre-order on Amazon.

Yummy, this looks so delicious. I love tomatoes in particular and I love this post. Good job. Visit http://www.7strategy.com/ for state-of-the-art custom web designs, e-commerce development and SEO services.