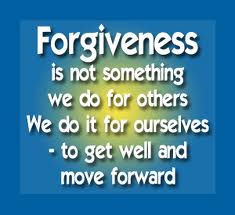 It's not every day that you learn something from watching television, especially if you can apply it to your own life.  The message was forgiveness, and I listened when Oprah interviewed twin young ladies who had been molested by their older brothers and their father most of their lives.  What made it worse, their mother knew and turned a blind eye.  How do your forgive that?

My problems in life haven't been nearly that serious, but I do know what it feels like to carry a ton of hatred.  The only person it weighs down is me.  You see, in 2002,  two fellow co-workers and I were sued by another for racial discrimination.  We had worked alongside this person for eight years and never treated her any differently than we treated one another.  In fact, there were many times I toted her work home to help her manage her load.  What's worse, like the mother in the case above, my employer turned a blind eye when they knew trouble was brewing years before.  Why they didn't call us in and discuss it, was beyond me.  We lost three valuable employees because of her and her inability to get along and had even gone to mediation three times on our own to try to resolve any issues she had.  The entire time, she insisted she had none.  I was so certain that after 20 plus years of proven exemplary service, my employer would comply with my request (and doctor's orders) to work apart from her.  Wrong!

It's a long terrible story, and  I didn't have the mental strength to remain without confronting her and asking WHY.  I eventually took an early retirement, and every month when my check comes I see what her selfish actions cost me.  What's worse... I still have no idea what I did to her.  I was handed the "papers" from the attorney and instructed to continue working with her as I had in the past, not ask any questions, nor discuss the case with anyone outside the university attorneys.

My best friend and a person named in the suit died in 2003 from Pancreatic Cancer.  The person suing us had the nerve to come to Pat's memorial service.  I bit my tongue and gave my eulogy for a friend who died way too young, and probably from the added stress of being sued. Guess who I blamed.

The one person who remained of the three is now the head of the department...something I might have achieved had I been a stronger person.  The person who sued?  She has my job.  I find it laughable since she couldn't even handle her own, but now I can pity her instead of hate her.  She's the one who has to live with what she's done, but then maybe she has no conscience. Mine is clear.


In a moment of hatred, I had planned to write a book entitled "Souled Out" about my experience at the University of California. I intended to name names and tell my story...resolution and retribution, but that idea would only dredge up more pain and angst for me and serve no purpose.  I'm not a litigious person, but I wish I had sued my employer for letting things get so far.  How can you fix something when you don't know it's broken?

What Oprah said made perfect sense.  To find peace you have to find forgiveness, BUT forgiveness doesn't mean you want that person back in your life, it simply means that you accept that the past cannot be any different than it was.  That's a tall order, but when you think about it, you can lighten your load and ease the burden you've carried with you.  I accept that the past can never change, I can't go back and fix anything, but I can let it go and move on.

I loved this post. Let's just say, many things have happened to me in the past. Have I forgiven? I think I have. Maybe because I understand the reasons behind the actions that so hurt me. What I find hard so forgive is disloyalty, a beaking of trust for no apparent reason other than downright selfishness. Sometimes, when am hurt, I want to lash out and hurt right back. There is no point.The answer is to move on. And forgiveness can only be given if a person wants to be forgiven. If they show no remorse, they don't care either way.

I too have accepted...I'm not sure about the forgiveness part because what was done to me will haunt me for the rest of my life asn my body continues to deteriorate from the violence inflicted upon it. Had it just been rape, the uaul way, then maybe I could put it past...I certainly have put the rape that happened when I was seventeen by my then boss behind me, but my ex needed to have blood as the lubricant for his gratification and in that he damaged me physically in ways I will never be able to fully recover from. When I had plastic surgery, eons ago, they told me the surgery was a bandaid that would eventually disintegrate. It's been disintegrating, forcing me to face new traumas in the guise of medical science.

My ex is in jail, finally, where he belongs, and I do not hate him. I feel sad for him because he will never know the wonder that is our children...they want nothing to do with him and they made that choice without me influencing it...I would never have forced the images of my memories upon them.

In the long run, my ex is the loser. I have found contentment. I don't know if that is forgiveness, but it is as much as I am capable of with the physical challenges I must endure every day for the rest of my life because of what he did.

Lin,
You have extenuating circumstances, and I'm not sure I could let everything go that you've been through. For me, I wouldn't spit on the woman if she was on fire, but I can accept that the past is the past and there is nothing I can do to change it. That in itself is liberating.

Viviane,
I know the feeling of wanting to lash out. Trust me, I wanted to in so many ways but fear made me adhere to the attorney's instructions. If my case wasn't an example of disloyalty, breaking of trust and downright selfishness, I can't think of what would fit the bill better. I let her win the entire time I carried around the hatred, but now, I'm the winner. I'm better than she'll ever be because I have a clear conscience and know she did it only for the money...and my job of course.