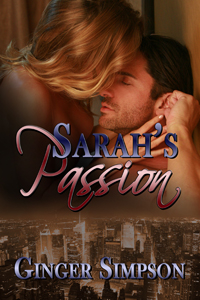 I'm excited about Sarah's Passion...a book I really hadn't planned on writing quite so soon, but to appease a few review commenters, I've working hard to continue the saga between Wolf and Sarah, a couple who got acquainted and bid farewell in the old west, but have now, at least from Sarah's POV, reacquainted in modern day Manhattan.  I can't wait to see if Sarah can recapture the love she cherished in the 1800s or if she's going to lose Wolf again, but this time because of entirely different circumstances.

Today, I'd like to share an excerpt from this WIP and get your take.  Remember, this is the first draft and you're the first to see it:

After wiping down the counter and table, [Sarah] she put away the candelabras, then sat on the sofa to pull on her socks. With one knee bent and an anklet half on, Sarah clearly envisioned the smiling and matronly face of Maggie Smith. In the night vision, the woman had been the only person in Independence to befriend Wolf and overlook his red blood. She’d also taken Sarah in, helped her find a teaching job, and stood by her when the rest of the town had a ‘hissy’ fit over a young Indian boy enrolled in class. Every memory rolled through Sarah’s mind as though it all had happened yesterday…a motion picture that replayed each detail vividly. Somehow she’d have to find a way to bring up Maggie’s name and see if it brought a reaction from Wolf. Looking in the phone book wouldn’t help. Smith was the most common last name ever, and who knew where she lived…or if she lived, ever.

Sarah put on her other sock, donned her tennis shoes, and then, in the kitchen, pulled the bulging garbage bag from the can. The smell of last night’s chicken mingled with the smell from the candles until she tied the plastic into a knot. Opening the door, she headed for the dumpster, only to run into another neighbor, Peg Scott, armed with own refuse and headed in the same direction.

Her streaked hair perfectly coiffed and her flawless make-up already on made Sarah feel inferior. Of course, Peg never went anywhere without looking like a runway model. In contrast to Sarah’s dowdy gray sweats, Peg’s running suit matched the bright blue strip in her jogging shoes. She flicked her long hair back over one shoulder with her free hand. “Have you had a chance to get a gander of our new neighbor? Hubba Hubba. What a hunk.”

“No,” she responded casually with a shrug, the lie rolling off her tongue with ease. “What’s so great about him?”

“Oh, girl. He’s yummm-me. Dark hair and complexion, broad shoulders, narrow hips, and arms that I’d do anything to have wrapped around me.” Peg’s eyes took on a dreamy haze.

Jealousy gnawed at Sarah. That proverbial green-eyed devil she’d always heard about turned red and perched on her shoulder, whispering in her ear that Wolf belonged to her. Fighting the urge to swing her trash bag around and bash Peg in her pretty made up face, she tamped down her feelings. Clearly Peg had no idea her target had already been a guest in Sarah’s apartment. She forced a smile. “Hmmm, have you met him yet?”

Peg gave another flip of her hair. “No, but I fully intend to find a way to introduce myself. He’s sexy with a capital "s"."

At the dumpster, Sarah loosened her fisted hands to stop her nails from biting into her palms and hefted her trash over the edge, her mind working a mile a minute. She had to get back to her apartment and find a way to distract Wolf for the day. If Peg got her clutches into him, Sarah might never get the chance to renew what they once felt…what she believed they felt. “I gotta rush, Peg. Nice seeing you, but I have some important errands to tend to. Catch you later.” Spinning on her heel, Sarah rushed back inside the building and down the hallway to her first floor apartment. She ignored the little voice in her mind that questioned her sanity.

Standing in the bathroom, Sarah stared into the mirror while she applied her make-up and styled her hair. Was the dream just that--a silly dream? If only she knew how to approach someone and ask the zillion questions whirling around in her brain. Why in the world would she conjure up a time when she was a pioneer woman on her way to California? Did she even have the courage to try and save another human being as she had Molly? Was all this a previous life? Experts claimed dreams meant something, but damned if this wasn’t the most confusing she’d ever had.

An image of Peg’s smiling face blurred Sarah’s own reflection, reminding her she had to hurry. A plan formed in her head as she shouldered her purse and closed her locked door behind her.

She stood at Molly and Wolf’s door, her palms sweating, and her breath halted. So far, no sign of Peg, but maybe she’d already been there. Sarah could only hope not. The woman was as annoying as a wart.

With a deep inhalation, she raised her hand and knocked, taking a final moment to straighten the tail of her silk blouse and run a pinch down the crease in her black dress slacks.

I can't wait to get back to it.   The great think about being a pantser is you never know where the story is headed until you get there.  I can't wait to see how Sarah handles Peg.  How about you?

Isn't there a Peg in each of our lives? If we're lucky, there's only one. LOL

What a great teaser you shared with us, Ginger. I'm very curious to see what happens next.

Great short excerpt, Ginger! Very descriptive. I could just imagine Peg get bashed in the face with the trashbag. LOL Definitely a Yay in my opinion!