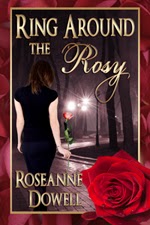 Ring Around The Rosy
by
Roseanne Dowell

Georgie Porgie pudding and pie kissed the girls and made them cry — now it’s time to die.

He released his hands from the victim’s neck, and the lifeless body slumped to the ground. He stood back, and stared at it in disgust.
“You thought you were so cool, didn’t you, George? Playing all the girls like that. You could’ve had anyone you wanted, but you weren’t satisfied with one. You wanted them all. Then you broke their hearts and left everyone else to pick up the pieces.”
He stooped down, lifted George’s head, and propped it against a rock, then pulled a tube of lipstick from his pocket and smeared it across the victim’s mouth. How many times had he seen George wipe off his lips coming out of the locker room? “You won’t wipe it off this time, Buddy.”
He stuffed a paper into George’s hand and tightened his fingers around it. “You don’t look too cool now.” He laughed and pulled a container of pudding and a strawberry pie out of his knapsack, opened them, and dumped them over George’s head. The gooey mixture ran down George’s face.
He licked his lips. “You poor, pathetic bastard.”
Gathering up his knapsack, he took one last look at the body, then turned and ran from the park. His job was done.

Susan propped the News Gazette on the counter and focused on the headline. ‘Georgie Porgie, Pudding and Die’ by Susan Weston, it blared at her. Her headline. Her story. She’d done it. Finally got her headline. She drummed her hands on the counter and did a little dance step. She swore if her grin got any wider her face would crack. .”Susan Weston, journalist!” she shouted. God, she wanted to shout it from the rooftops.
The ringing phone startled her. “Who the heck is calling at this hour? “ She grabbed the phone. “Hello.” Bella rubbed against her legs, waiting to be fed. “Hello?” Susan grabbed the box of kitty food, filled the bowl, and set it on the floor.
“Hello,” she repeated, ready to hang up if no one answered this time.
The evil, raspy voice on the other end sent goose-bumps up her spine. “Who is this?” she whispered.
The voice mumbled something she could barely hear.
“Strawberries? What are you talking about?”
“Just for you,” the garbled voice continued.
“I can’t hear you. Who is this?” What kind of sick joke is this?
She caught the words, “loved your headline,” more garbled words, and “Watch for Jack be nimble.” Then the phone line went dead.
Susan grabbed the counter to steady herself. Her hand trembled, and she stared at the phone. She dropped the receiver back into its cradle as if it was on fire. But she couldn’t stop the trembling. Her stomach churned. Nausea filled her throat. What was wrong with her? Just someone playing a sick joke. This wasn’t her first crank call, why react like this? Maybe because none of the others had sounded like this.

Email ThisBlogThis!Share to TwitterShare to FacebookShare to Pinterest
Labels: A Page Straight From, Books We Love, Dishin' It Out Guest, Ring Around the Rosy, Roseanne Dowell

Thanks for having me, Ginger.

Looks great. Made me get goosebumps.