Where Do I Get ideas For Stories? By Connie Vines

Where do I get ideas for my stories?

I imagine every author has a 'wave link' that attracts stories.
Native Americans believe that Story Tellers have a responsibility
to give a 'story' life.  Therefore, the story finds the story teller.
Is this a good thing?
It is if it's any 'easy' story to write.
However, the path from beginning to The End is seldom easy.

My first romance novel, came to me during a family vacation in the mid-west.  We were in a café and bit of banter between a woman and a cowboy popped into my head (in my case, dialogue is what seems to be the 'jump-start' mode to 99% of my stories).  Later during a rodeo in Nebraska I watched a bull-riding event.  This is when Lynx Maddox walked on to page one.  This novel was awarded numerous awards and was fun to write.  I had a vague plotline which my characters seldom adhered to.  While every writer loves all the characters in his/her novels (well, aside from the villains), Lynx is still my favorite.

While I was writing my first romance novel, I was also researching my first historical YA novel.
I was involved in the Indian Education, Title IX Programs, and served on the PAC (parent advisory committee for K-8 school district). I also facilitated workshops for the Native American children in the district.
Larry Sellers (Cloud Dancing) actor/stuntman in "Dr .Quinn, Medicine Woman" on television. hosted a workshop.  We were speaking during the break. I told him about the novel I was working on.  He advised me to complete my story and shared his experience as a child in boarding schools. (He only spoke Sioux when, as a five-year-old, he was sent to a boarding school.) He, and others, endured terrible hardships--hardships even worst for students in the late 1800's.
The research required locating archived materials, visiting Native American boarding schools, interviewing adults who had attended the school or could recall stories told to them by parents or grandparents.  My characters are not molded after a particular person, but a composite of the  people I interviews or read about. This story tore at my heart. The stories I heard and the shawl of sadness which still effected those, even in old age, always stays with me.

This novel, Tanayia--Whisper upon the Water, took five years to complete.
The novel was nominated for a National Book Award and The Frankfurt e-Book Award.
I'm ready to begin the 2nd in this series because the story is starting to call to me.  Right now it is only in the basic plotting stage because stories dealing with the dark side of humanity are emotionally draining to write.
I also write in multiple genres.  In genres you would probably not expect a writer who is so immersed in historical research to dapple in.
My first published magazine article was featured in "Junior Medical Detective" and later appeared in the Thomas Gaye Educational Series.  The story was titled, "A Candle in the Dark" and it was about the Salem Witchcraft Trials.
I write Sassy and Fun Fantasy, and anthologies (on of which will be available in April 2021).

Currently, I finishing my anthology (Gumbo Ya Ya: for women who like Cajun romance).
This anthology covers multiple genres: Romantic Comedy, Contemporary Romance, Cozy Mystery, A Ghost Story, and...I don't wish to spoil the plot for the 5th story. 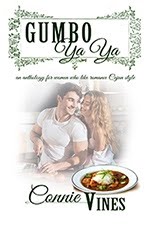 Cajun stories?
My husband is from Louisiana and New Orleans and the French Quarter are one of my favorite vacations spots.
Café Du Monde with coffee au lait and beignet dusted with a mountain of powdered sugar are my personal faves!